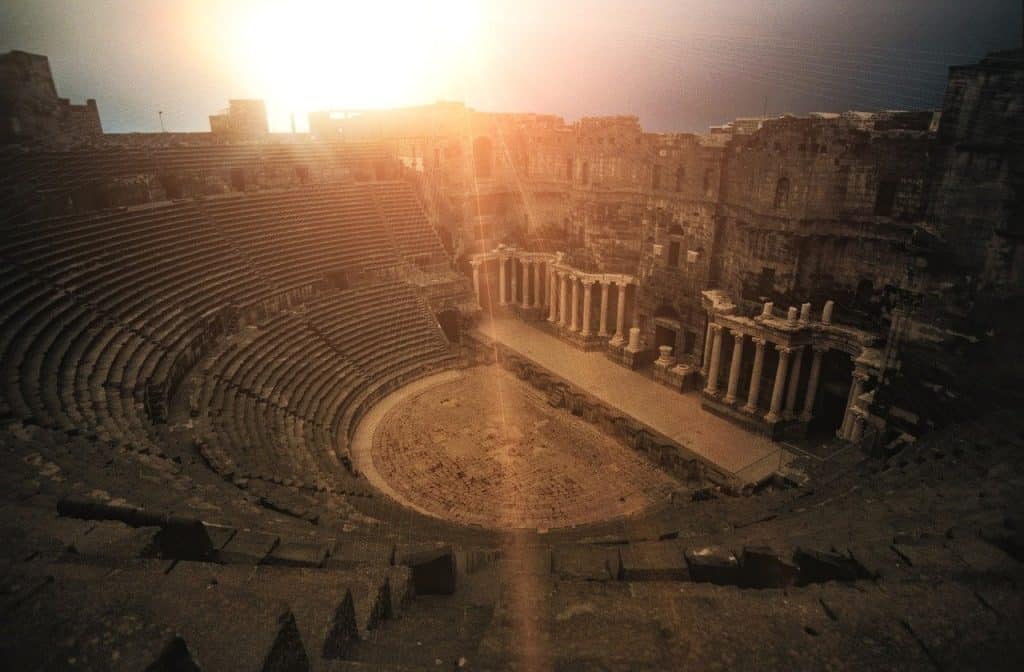 The best colossal Roman remains in the Provence region!

Gaul was the name of France when it was a province of Rome because yes, we were not always as fiercely independent as we are today (except for the little village where Asterix lived, obviously).vestiges romaines

The Romans did not pass by, they stayed more than 500 years and left in France all kinds of Roman vestiges: amphoras, mosaics, aqueducts and bridges, but also some dubious habits and Latin, basis of our language.

When the Romans arrived, they found - rather than the baguettes or coffee shops they might have expected - a mix of warlike and druid-worshipping Celtic tribes, which they of course decided to invade and subdue.

Provence is one of the French regions with the most monuments dating from antiquity. Indeed, it has inherited a rich heritage best preserved. Moreover the name "Provence" comes from the name that the Romans gave to this region: "Provincia Romana".vestiges romaines

Top 5 ancient monuments in Nîmes and other Roman places!

Here is our selection of the 5 most beautiful monuments to see with Planetazur ! 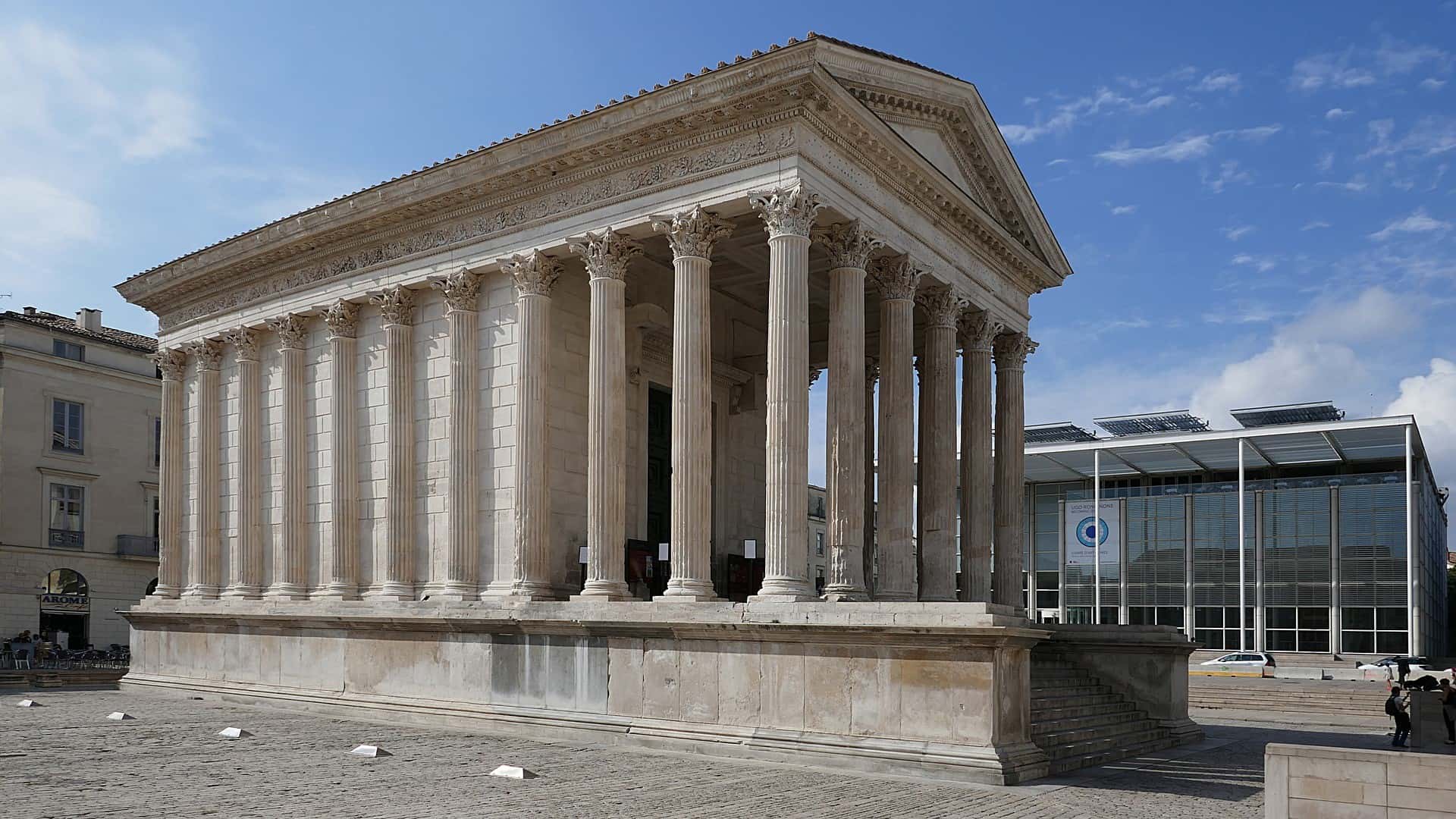 Everyone agrees that among the Roman remains, the best preserved Roman temple is not in Italy, but in the south of France.

Known as the Maison Carrée, this exemplary Roman temple stands on what was once the forum of Nîmes.

Construction of the temple began around 16 B.C. or slightly earlier, at the very beginning of the Pax Augusta or "Augustan peace. Rome's first emperor, Augustus (r. 27 B.C. - A.D. 14), brought about a definitive peace after decades of civil war, a fact celebrated in Virgil's Aeneid, among others.vestiges romaines

It is an ancient Roman temple located in Nimes, in the south of France. It was built by the Roman statesman and general, Marcus Agrippa, in dedication to his sons. The temple is composed of Corinthian columns in the main entrance and columns attached all around the structure.

For only 8 €, you will have access to the entire Maison Carrée. 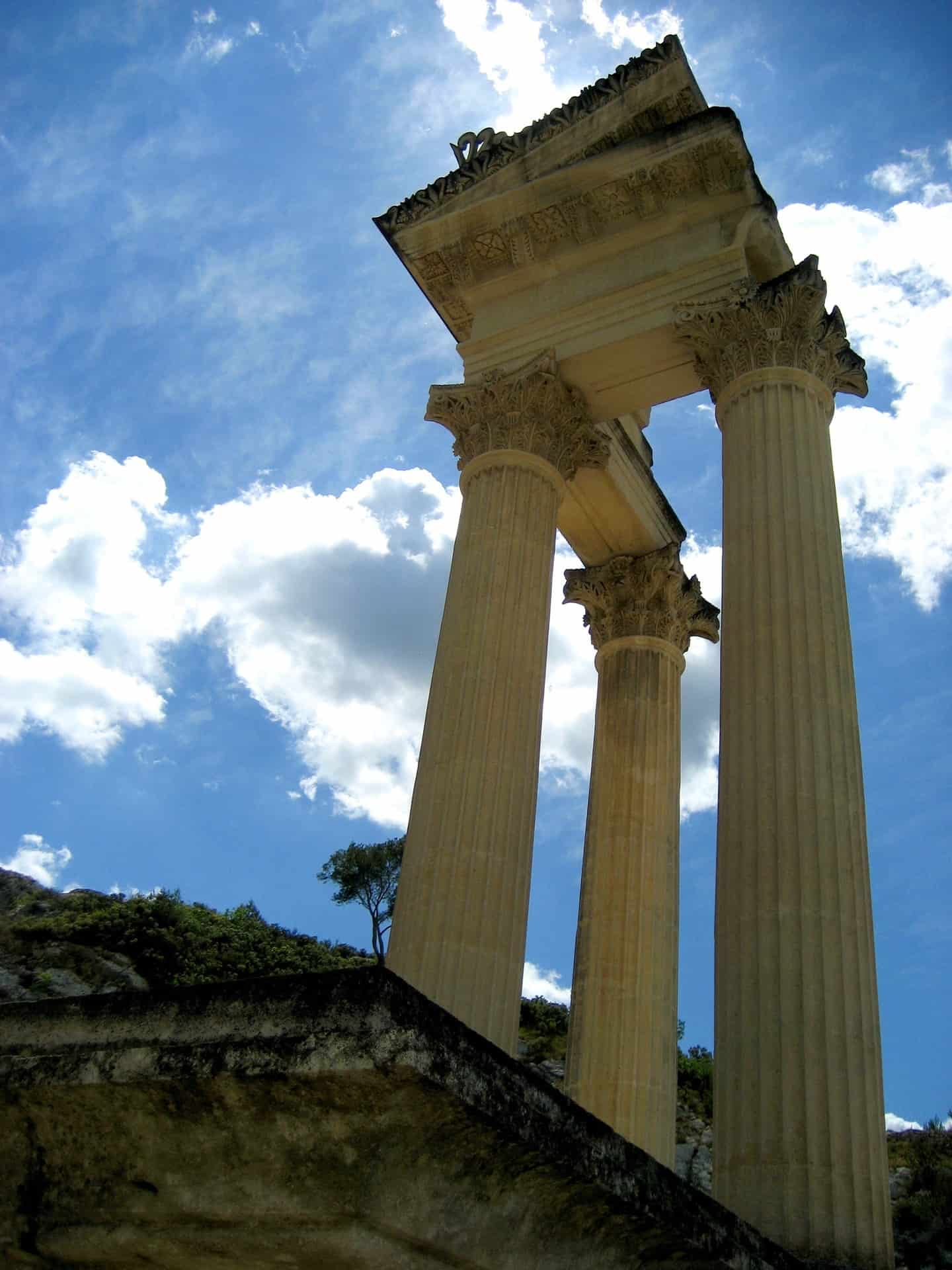 2. The ancient city of Glanum, Saint-Rémy-de-Provence

In another atmosphere, you will discover the ancient city of Glanum discovered in 1921 and remained in the ground for 17 centuries. This ancient walled city was originally built by the Salyes in the 6th century B.C., but later relations with the Greek world in the 2nd and 1st centuries B.C. added Hellenistic styles to the city.vestiges romaines

During the early years of the reign of Emperor Augustus, around 27 BC, Glanum officially became a Roman colony. This led to a rapid transformation of the city's architecture, including a new forum, temples, a dam and an aqueduct, which supplied the city with water and public baths.

Unfortunately, Glanum did not survive the collapse of the Roman Empire, around 260 AD. The city was then abandoned by its inhabitants. However, you will find the two best preserved monuments of the archaeological site, namely the triumphal arch and the Mausoleum of Juili (around 30 BC).vestiges romaines 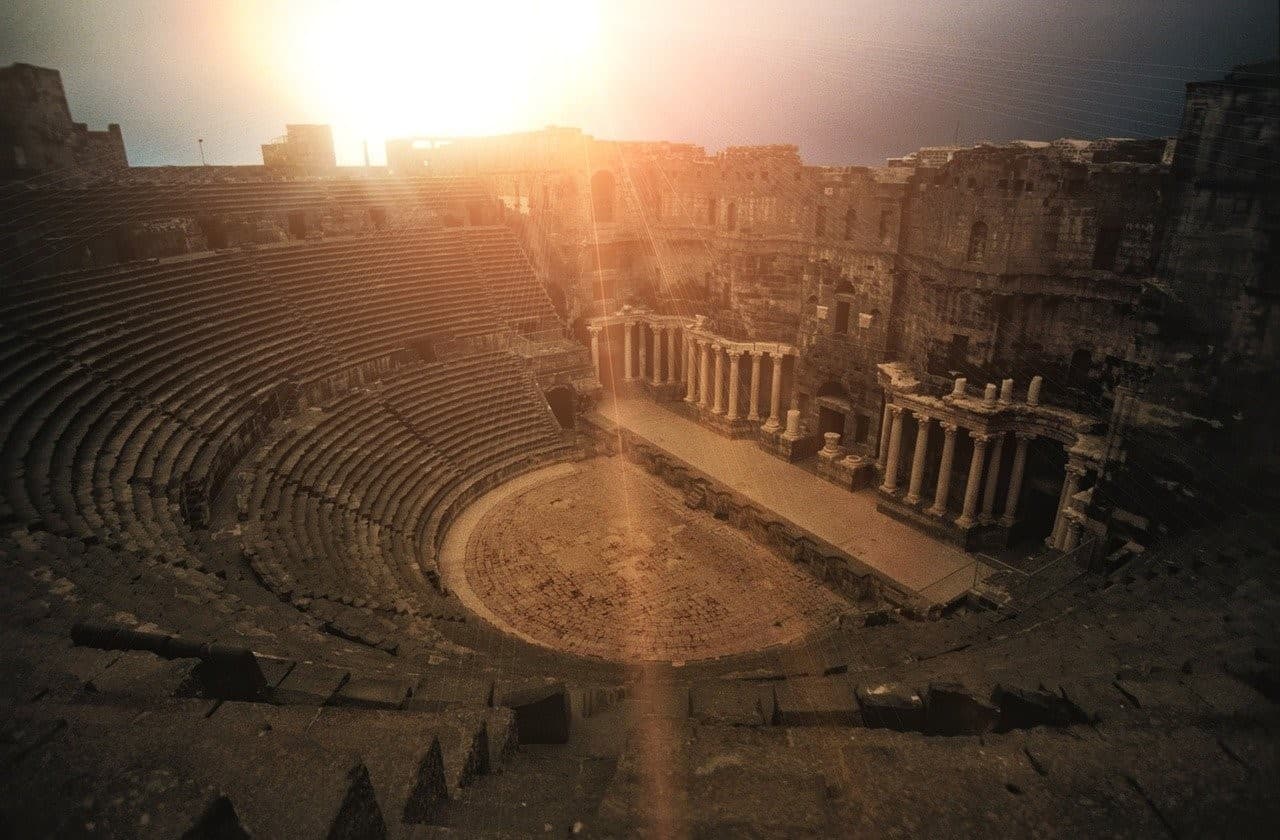 3. The ancient theater of Orange, the best preserved!

The Roman theater of ancient Arausio (now Orange, in the south of France) is one of the best preserved examples of ancient times. Built in the first century AD, it could seat 9,000 spectators and is dominated by its massive stage wall and façade decorated with columns, doors and niches. The theater was inscribed on UNESCO's World Heritage List in 1981 AD.vestiges romaines

The theater was built at the end of the 1st century AD using local yellow and white limestone, the tiers being built on the side of the hill of Saint-Eutrope. The stone bleachers had three levels of 20, 9 and 5 rows of seats, giving the theater a capacity of about 9,000 spectators.

Each tier had its own doors and entrance tunnel, and patrons could not move from one tier to another once inside the theater. The seats in the first three rows were reserved for VIPs such as city councilors, and some still bear inscriptions. Although they have been restored, some of the original seats are still in place in the upper sections on either side of the stage.

You will have the opportunity to visit the theater in virtual reality. For 10 €, you will be able to observe the progress of the construction of the ancient theater as if you were a Roman of antiquity!

4. The spectacular arena of Nîmes, everything of a Coliseum in France!

The Arena of Nîmes can be considered as one of the best proofs of the advanced engineering of Rome. The construction and complex architecture of the amphitheater is a true marvel of ancient engineering perfection.

This arena is located in the French city of Nîmes, in the Languedoc-Rousillon region, in the Gard department, and was built around the year 70. It is the pride of the people of Nîmes and a monument that every lover of Roman history must see.

The monument was remodeled and restored to its magnificent state in 1863 and since then it has been used for bullfights, concerts and various other public events. The building, which today can accommodate 16,300 spectators, has a comfortable heating system and a movable roof, which can be covered when necessary, usually in winter.

Surrounded by a beautiful granary and about sixty arcades on two floors, this 21-meter high monument is the best preserved Roman arena in the world. Roughly elliptical in shape, it is 133 m long and 101 m wide.

If you want to visit the Maison Carrée, you should not miss the Arena of Nîmes! 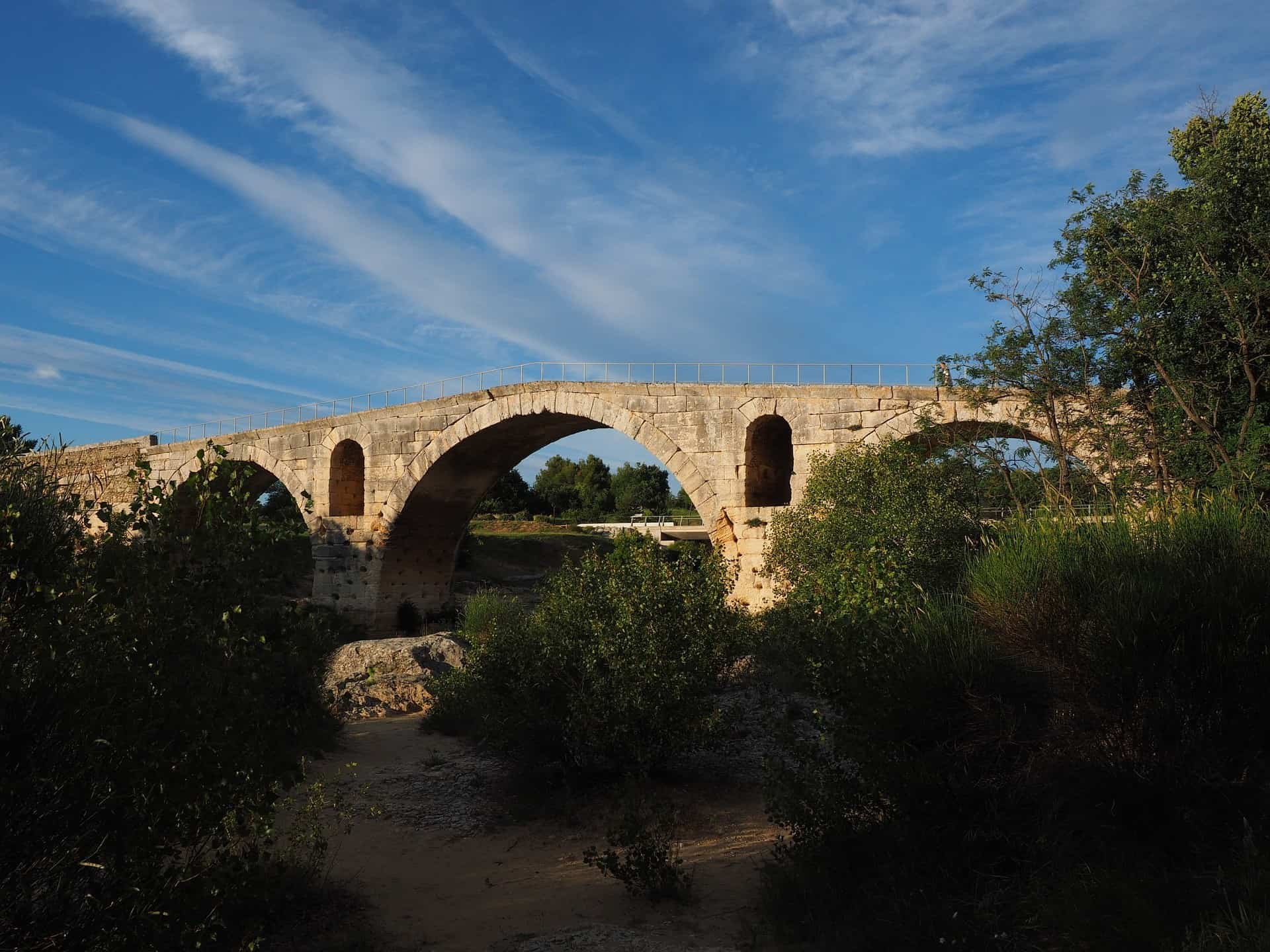 5. The Julien Bridge and its three arches perfectly preserved!

Named after the Roman emperor Julius Caesar, this beautiful stone bridge with three arches is one of the rare Roman bridges that still exist in Provence.

It is the only surviving bridge on the Via Domitia, the first Roman road that linked northern Italy to Spain through conquered Gaul (now southern France). This road bridge has allowed traffic to cross the Calavon River for more than 2000 years, which testifies to the extraordinary know-how of Roman masons.

Built during the 1st century B.C. (probably between 45 and 27 B.C., around the time of the foundation of the nearby town of Apt), the Pont Julien is made of limestone blocks quarried from the nearby Luberon mountains. It has three perfectly semicircular arches, the central one being slightly larger than the other two, so that the two pillars could rest on solid foundations.

Two small openings were cut in the pillars to relieve the pressure and prevent the bridge from being overturned when the river rises, which is difficult to imagine given the small trickle of water in which the Calavon has dried up.

Not to be missed!

If you want to go to unique places with Planetazur, 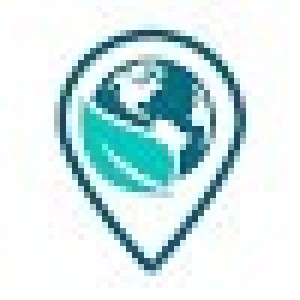